Definition of the organization

Youth Organization for Development and Democracy is a civil, non-governmental, and non-profit organization. It was established in 28/4/2011 by a group of youth, trainers, and experts in local and international organizations, who are independent of any political affiliation.

Generally, YODD aims to empower youth politically and economically. And promoting the values of democracy and human rights. It believes in the importance of justice in development and broad participation of youth in decision making and playing efficient roles in the development of society. During the years 2012 -2015, the organization was able to build a wide network of relationships and implement a large number of projects that reached 29 projects in various fields to achieve its goals. It signed more than 13 cooperation agreements with the local authority in the governate and directorates and more than 23 agreements with international partners. Our projects funds have reached during that period to 400,000 $ for the largest project and 15,400 $ for the smallest project with a total value exceeding 1,500,000 $.

The most important awards we obtained

The organization won the Davis Economic Forum Award for Youth Innovation in 2013 for the best project to empower young people. It obtained a second ranked certificate globally in the peace conference in South Korea for the best three organizations that involve youth in the peace industry in the world in 2014. In addition, it obtained a large number of local awards and certificates of appreciation, including a shield The General Secretariat of the National Dialogue 2015. 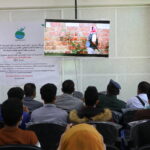 Pictures from Conclusion of discussion sessions and films review on peace and coexistence.